"No Ghanaian artiste can sell out 02 arena" -  different reaction as Davido sold out his first 02 arena with a capacity of 20,000 people.

Popular Nigerian singer, David Adeleke popularly known as Davido, O.B.O (Omo Baba Olowo) has just sold out his first 02 Arena show that will be coming up on Saturday 5th March 2022. 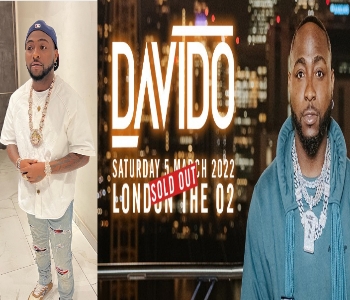 The official handle of the 02 Arena confirmed the singer's achievement via Twitter, reacting to this, Wizkid's fans (Wizkids FC) and Davido fans took the comment section to another level.

One of the Wizkid fans commented;

Some of those people shouting wizkid sold out 02 in 12 minutes has forgotten the December factor that might have played out.U can't compare the turn out of the show held in December wit the one taking place in march....December is for chilling unlike March.

Then another fan decided to ridicule the Ghanaian artists instead, she said;

Naijatori.com.ng doesn't restrict you from republishing our content on your website but make sure to give us proper credit. Your articles will be removed from Google and ads will stop displaying on that page if proper credit is not given to us.